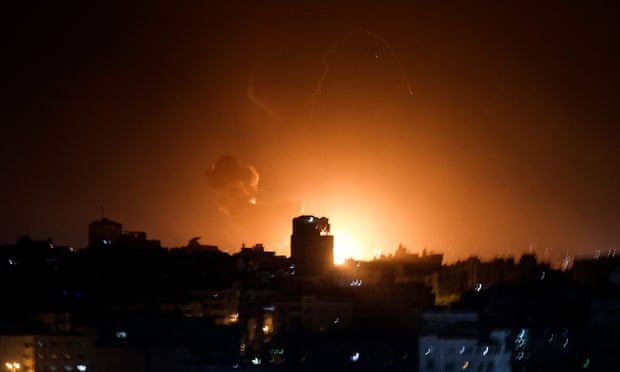 Israel conducted airstrikes on the central Gaza Strip early on Thursday, according to journalists and witnesses, hours after the military said it intercepted a rocket fired from the Palestinian territory.

New rounds of rockets were fired from Gaza after these strikes, and fresh explosions could be heard from Gaza City about 3.15am local time, Agence France-Presse journalists reported. A suicide bomber struck a crowded mosque inside a police compound in Pakistan on Monday, causing the roof to collapse and killing at least 59 people and wounding more than 150 others, officials said.

Most of the casualties were police officers. It was not clear how the bomber was able to slip into the walled compound, which houses the police headquarters in the northwestern city of Peshawar and is itself located in a high-security zone with other government buildings.

DRC’s army confirmed the withdrawal, calling it a tactical move to protect civilians in the face of renewed unrest provoked by the rebel fighters’ reinvigorated offensive.

The rebels took control of Kitshanga late Thursday after capturing several villages on the road linking the town of about 60,000 people to the provincial capital Goma.

Ukraine has urged the West to get military hardware into the hands of its troops as quickly as possible, as Russia fired missiles toward Kyiv and other Ukrainian cities just hours after Germany and the US announced their plans to provide modern tanks to the country.

Russia launched 55 missiles at Ukraine on Thursday morning, Ukrainian Prime Minister Denys Shmyhal said on Telegram. Shmyhal said the salvo was aimed at the country’s “energy facilities” and some power substations had been hit. Heavy fighting erupted between government forces and M23 rebels on Tuesday morning in the eastern North Kivu province of the Democratic Republic of Congo, local officials and residents said.