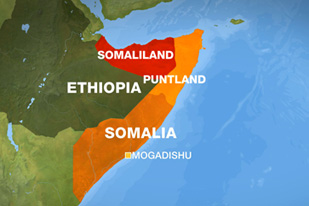 The self-declared state of Somaliland is stepping up its push for international recognition, warning that the world’s continued refusal to formally accept its independence threatens to plunge the breakaway region back into armed conflict with Somalia.

“We have made a lot of progress in the past 27 years and now we are recognised as a de facto state” Saad Ali Shire, foreign minister, said in an interview in the capital, Hargeisa. “[But] the next 27 years is not going to be like the first,” he said. “War is bound to happen unless the problem is settled peacefully one way or another.”

This year Somaliland’s army has already clashed with troops from the northern Somali region of Puntland in an escalation of a long-running stand-off over contested territory. So long as Somaliland’s statehood and national boundaries are not formerly recognised, the risk of renewed conflict will increase, Mr Saad said.

The former British protectorate of Somaliland united with Italian Somalia in 1960 following independence and then broke away in 1991, when clan militias overthrew Somali dictator Siad Barre’s government.