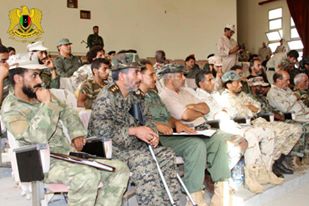 There were heavy air strikes this afternoon in Benghazi’s Leithi, Gwarsha and Sabri districts following the announcement of a new military operation against the Islamic State and other militant groups in the city.

The launch of Operation Doom (Hatif) was unveiled earlier in the day by the head of Libyan armed forces, General Khalifa Haftar, at a military gathering at Benina Airbase.

Almost all the army and air force top brass in Benghazi were present, includeing the head of Saiqa Special Forces, Colonel Wanis Bukhamada, and the head of the Benghazi Operations Room, Colonel Ali Elthemen.

According to Haftar, the operation will be intensive, will see greater coordination between air and ground forces, and will target the militants’ weapon and supply stores as well as their bases.