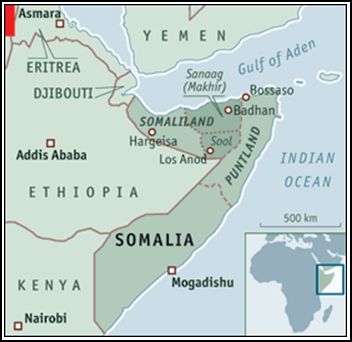 According to news reports coming from Taleeh fighting erupted between two ethnic groups, one pro-Somaliland and the other supporting the semi-autonomous region of Puntland.

The two groups clashed at the outskirts of Taleeh village which lies east of Sool province and 180km away from Las Anod, Sool’s provincial capital.Fighting left casualties including loss of life and injuries sustained by the two sides that engaged in armed war.

The pro-Somaliland group ambushed officials from Puntland president who were en route to Taleeh while they were escorted with battle wagons.

The group in favor of Somaliland fired to the militia group from Puntland’s capital of Garowe.
Reports indicate that three men died and two other men were reported to have sustained injuries.

Mr. Jama Ali Shire, the brother of Puntland vice president is one of three men reported to have been killed in the clash.