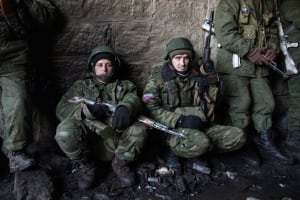 Russian-backed separatists wait for their transport, preparing to leave towards the frontline, in the village of Vergulivka, Eastern Ukraine. (Maximilian Clarke/Associated Press)

Shelling suddenly stopped at midnight local time in the eastern Ukrainian city of Donetsk after President Petro Poroshenko gave the order to government forces to halt firing in line with a ceasefire agreement reached
last Thursday.

Poroshenko, wearing the uniform of the armed forces supreme commander, said in a televised address in the capital Kiev that there was still “alarm” over the situation around Debaltseve, a key transport hub, where government forces are hard pressed by encircling Russian-backed separatists.