Mali: Islamists of Movement for Unity and Jihad in West Africa (MUJWA) seize Gao town from National Movement for the Liberation of the Azawad (MNLA) tuareg rebels 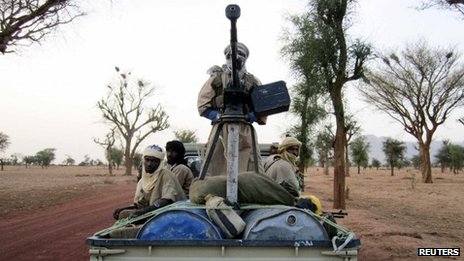 Rebel factions in control of northern Mali traded heavy arms fire in the city of Gao on Wednesday, threatening an uneasy power-sharing deal between Tuareg separatists and al-Qaeda-linked militants.

The clashes came a day after at least two people were killed in the town when fighters from the separatist MNLA group broke up a protest march by local youths. Islamist group MUJWA, a splinter group of the area’s al-Qaeda branch, had sought to intervene between the protesters and the separatists.

“The MNLA and MUJWA are launching rockets at each other between the two markets of the town and the governor’s building,” Gao resident Sila Askou said by telephone of the governor’s premises in which the MNLA has set up headquarters.

“Right now the only people in the streets are the two armed groups fighting each other. Everyone else is staying at home,” added Askou.