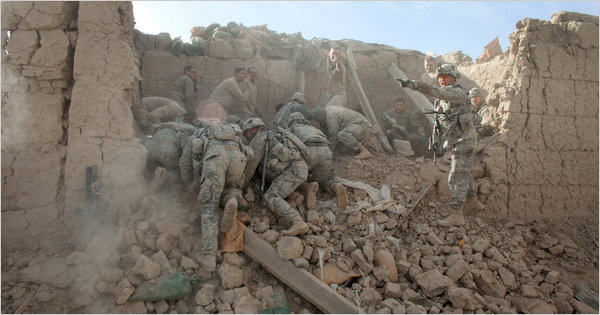 Six american soldiers were killed and more than a dozen American and Afghan soldiers were wounded on Sunday morning when a van packed with explosives detonated beside a small joint outpost in southern Afghanistan.

The soldiers were at a new strong point in a small mud-walled building near the village of Sangsar, north of the Arghandab River, when the bomber drove up to one of the building’s walls and exploded his charge at about 9 a.m.

The blast was easily audible roughly 8 miles away, and sent a dusty mushroom cloud towering over the farmland.

The explosion blasted a large hole in the thick wall, causing the roof to collapse on soldiers inside. Other soldiers quickly arrived and clawed and pulled at the waist-deep rubble to free the buried troops.